Forum “Generations of the Holocaust”

The first forum devoted to “Intergenerational Survivors of the Holocaust, Jewish Veterans, Hidden Children, Righteous Among the Nations” was held in Paris, 2-4 February 2019. Organised by the Mémorial de la Shoah and 30 partner organizations, including the Simon Wiesenthal Centre and its branch association Verbe et Lumière-Vigilance, the forum proved a great success, with over six hundred attendees. 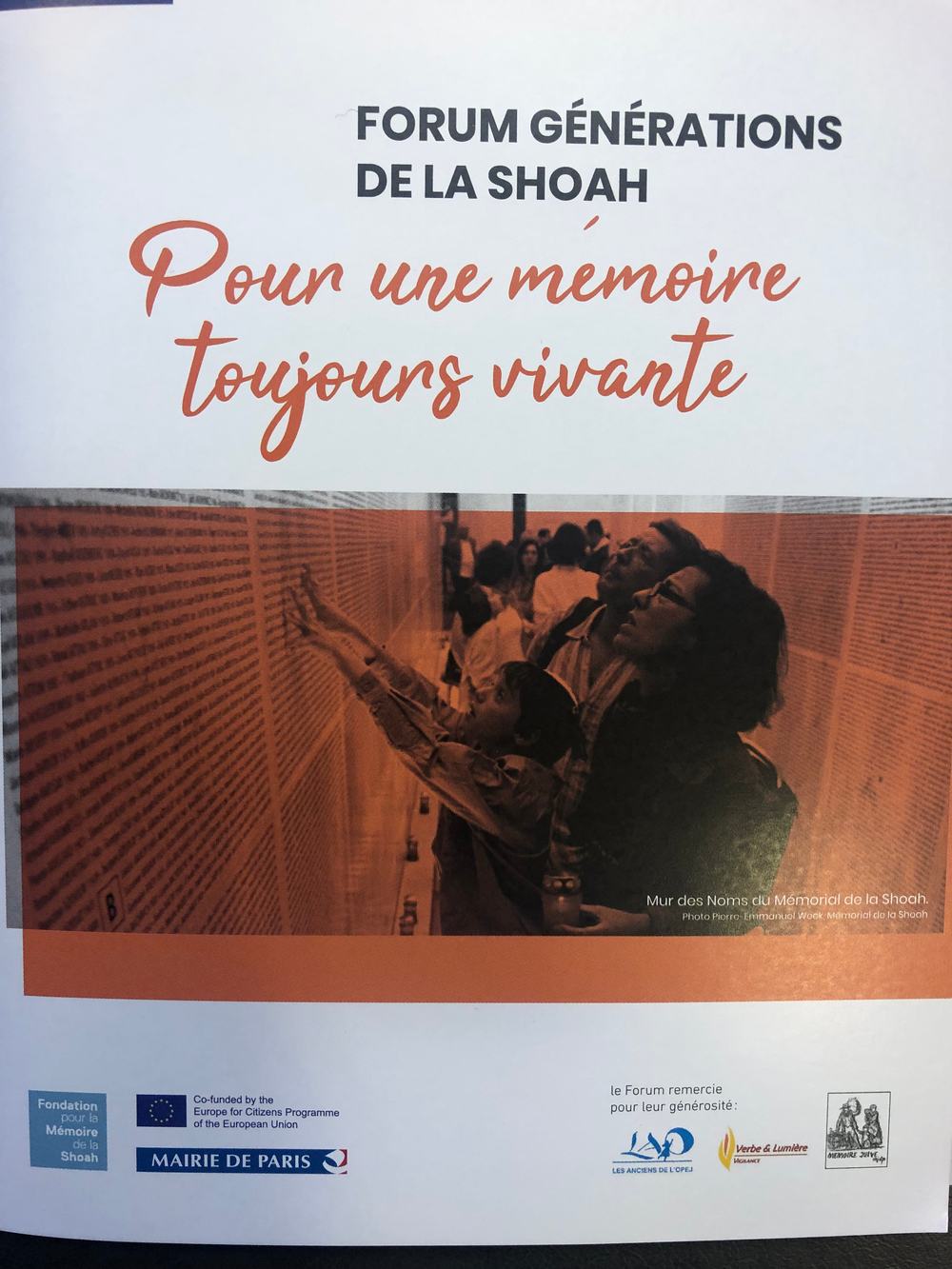 “For a forever living memory”

Well known speakers such as Boris Cyrulnik, Jean-Claude Grumberg, French Chief Rabbi Olivier Kaufmann and Serge Klarsfeld headed workshops and conferences which were divided into three sessions: “My family history and legacy” (7 workshops), “Transmitting Memory in all its forms” (3 conferences followed by 7 workshops), and “Pursuing Remembrance, Transmission and Prevention” (6 workshops).

During this last session, Richard Odier, President of the Simon Wiesenthal Centre (SWC) and of Verbe et Lumière-Vigilance, spoke to a packed audience in the workshop: “Fighting Contemporary Antisemitism: Exchanges amongst activists, public officials, community leaders and generations.” The following is his speech. 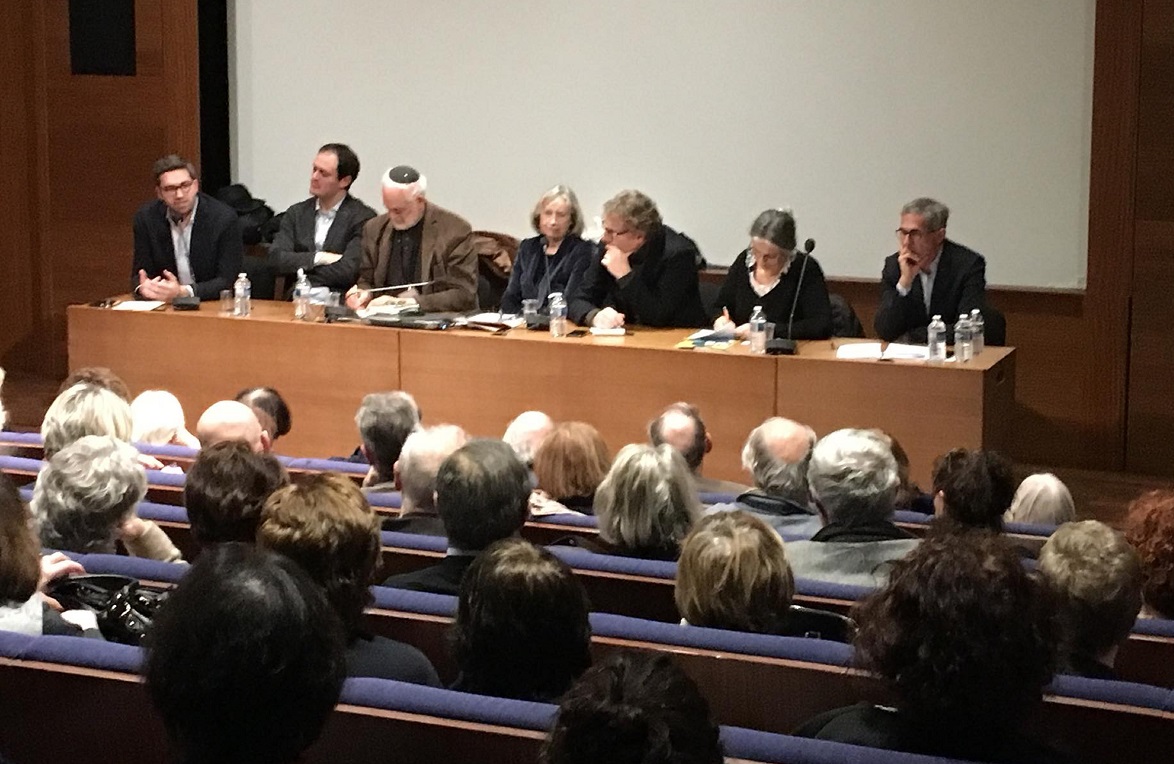 Speech by Richard Odier, President of the Simon Wiesenthal Centre France and of Verbe et Lumière-Vigilance

“To share my thoughts in this workshop, using the legacy of Simon Wiesenthal as a backdrop, I proffer 2 prerequisites, 4 observations and 3 short conclusions.

We must admit that the famous ‘Duty of Remembrance’ does not work in fighting against antisemitism:

1) A survey published by CNN, at the ceremony for the Anniversary of the Liberation of Auschwitz in January 2018, indicated that 25% of young French people admitted they knew nothing about the Shoah – even though it is taught in at least three different phases as part of the compulsory school programme. At this level, it is not a matter of teachers nor schools, but a “phenomenon,” whereas the Holocaust does not mark people’s minds. Besides, the survey reveals that one quarter of the people interviewed in Europe consider that Jews have ‘too much influence.’ I will not comment on the ‘too much!’

2) In January 2018, I spoke at the FSJU Annie and Charles Corrin prize giving ceremony. The FSJU (United Jewish Welfare Fund) was rewarding the best school educational programme on the Holocaust. The ceremony took place in the most prestigious Paris educational institution, the Lycée Louis-le-Grand. Mr. Boris Cyrulnik handed FSJU the prize. However, despite the notable presence of the school’s Principal, none of the students of this symbolical “Temple” of the Republic showed up. None of the students from these famous preparatory classes, who would have known Boris Cyrulnik and who, no doubt, would have achieved excellent marks for their work on genocides. One thus sees here a dichotomy between engagement and education, between knowledge and empathy.

1) The law cannot resolve all problems linked to antisemitism. No total justice can be achieved after a genocide. As for the Holocaust, hardly a few hundred trials were held between 1945 and 1947, and they were mainly military tribunals, as in the case of the Nuremberg Trials. From 1949 to 1970, there were only some 6 thousand judgments, though the crimes had been committed by hundreds of thousands of people. Of those trials, only a few ended in convictions. The principal Nazi hunters, such as Simon Wiesenthal or Beate and Serge Klarsfeld, were alone in their combat, only supported by a handful of activists.

2) As Axel Corti expressed, over 30 years ago, in his great movie ‘Welcome in Vienna,’ ‘they will never forgive us for the harm they did to us.’ In France, the over 69% rise in antisemitism acts committed in the first half of 2019, together with the CNN survey on prejudice, show how true his prophecy was.

3) The error of the lessons of the Holocaust is to not have understood that this catastrophe is not a calendar event, 1939-1945 or even 1933-1945, but that it should be placed in the context of ages of deeply rooted prejudice, the ‘indoctrination of contempt’ against the Jews. If we only teach the outcome of our 6 million brothers and sisters with a view on WWII alone, then we understand nothing of the phenomenon and it becomes an ‘incident’, albeit a tragic one, of history.

4) The Holocaust generated or amplified the feeling of existential insecurity among Jews. Their destruction went over and beyond the event. Nevertheless, we are now daughters and sons of deported relatives, offspring of survivors, but we are not deported from father to son. Therefore, for those who do not want to understand, we yet hear their words clearly, from fathers/mothers to sons/daughters!

Using words clearly and precisely is the very definition of Judaism, according to French Chief Rabbi Olivier Kaufmann. There must be no competition on Remembrance, but rather the willingness to listen to others, express empathy, even engage in joint activism when there is mutual respect, as the Simon Wiesenthal Centre has been doing within the Collectif Urgence Darfour, directed by the former President of Médecins du Monde, Jacky Mamou, with our Armenian friends, with Tutsi from Rwanda, but especially our brothers from the International League against Racism and Antisemitism and the French NGO SOS Racisme.

1) In order to fight antisemitism, one needs to be precise, vigilant, upright, and refuse any globalization of ‘the Other’ (Arabs, Blacks, Women, Red-haired, Sephardi…).

2) The second act, once again, goes through the ballot box, and especially our obligation, for the next European elections, to refuse all extremisms and populisms, from the far left to the far right.

3) On the question of optimism or pessimism, we all know the Jewish joke, saying that the pessimist ends up in Hollywood while the optimist ends up in Auschwitz. However, this story does not reflect the vision of two well-known prophets of contemporary Judaism:

The first, a Cohen obviously, Leonard is his first name, the Canadian singer and poet who, when asked the question ‘Are you an optimist or a pessimist?’ responded wisely: ‘I am a prophet of disaster.’ When thunder rumbles but it doesn’t rain, the optimist says ‘it won’t rain,’ the pessimist says ‘it will rain.’ The Jew is obliged to wait in order to act according to the right moment. He needs to be permanently agile.

The second great contemporary Jewish prophet is David Ben Gurion, who in the same spirit as Leonard Cohen, said that the very essence of Judaism is the momentum.

The same applies to antisemitism: we have to adapt constantly, for it mutates and we must continually propose actions anchored in the actual moment.”

See link to the Forum program (in French): Programme_du_Forum.pdf
Highlights of the event (in French): https://www.youtube.com/watch?v=S_7uqop_oms&feature=youtu.be