25th Commemoration of the genocide perpetrated against the Tutsi in Rwanda: “Remember and transmit.”

On the occasion of the 25th commemoration of the genocide perpetrated against the Tutsis in Rwanda, the NGO Ibuka France – in partnership with the Holocaust Memorial, the Foundation for the Memory of the Shoah, the Paris City Hall, the EHESS (School for Advanced Studies in the Social Sciences), the UEJF (Union of Jewish Students of France), SOS Racisme, the IHEJ (Institute of Advanced Studies on Justice), Médecins du Monde (Doctors of the World) and other associations working in the field of memory – organized exhibitions, conferences, meetings and other events, from March 22 to May 24, in the Ile-de-France region and throughout France...

This was a unique opportunity to analyze the latest genocide of the twentieth century, understand its origins and consequences, but especially to re-assert support to the victims and their families.

As every year, the Simon Wiesenthal Centre was present at these events, mainly in the educational and social action programmes on the lessons of the last genocide of the twentieth century.

The official commemoration ceremony was held in Paris on Sunday 7 April, a day full of emotion and characterized by strong moments. The participants gathered in the Luxembourg Garden in central Paris, followed by a silent march to the park of Choisy (in southern Paris), where a memorial ceremony was held. Then, a wreath laying ceremony took place at the Père-Lachaise cemetery, followed by a gathering at the headquarters of Médecins du Monde (in northern Paris). 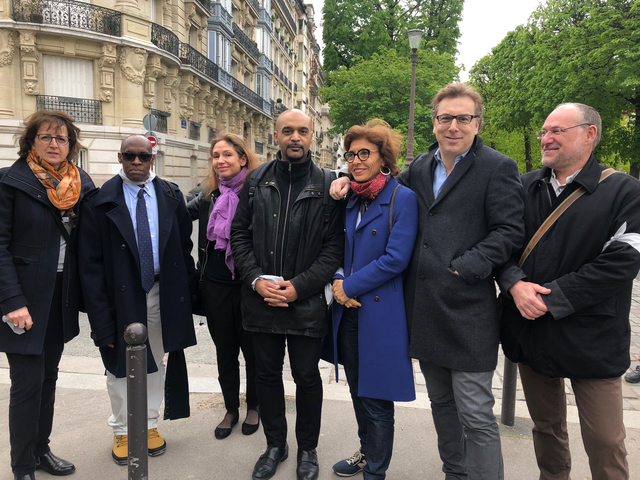 The facts: In 1994, the Rwandan Tutsi community was marked for extermination by Hutu extremists, who mobilized state assets and involved a large section of the civilian population. The international community witnessed, passively, the massacre of more than a million innocent people. For three months, from April to July 1994, no Tutsis were spared in this hunt – from the fetus to the elderly – as well as any Hutus who chose not to adhere to the deadly scheme. Three quarters of the Tutsi population perished in what will become the last genocide of the twentieth century.

The NGO Ibuka, “remember” in Kinyarwanda, the national language of Rwanda, is present in several countries. Its mission is to keep alive the memory of the Tutsi genocide in Rwanda, implement justice on those responsible for the crimes and support the survivors of the massacres perpetrated in 1994. Ibuka has adopted the motto of Elie Wiesel: “A murderer always kills twice, the second time with silence.”