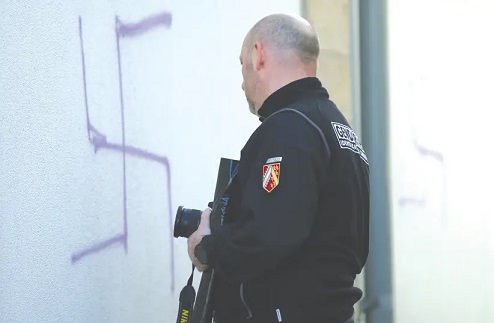 A French gendarme inspects swastikas painted on a wall of a former synagogue
turned into a cultural center in Mommenheim near Strasbourg (photo Reuters).

As a member of the CRIF Commission for Political Studies, the Simon Wiesenthal Center was present. Speakers were drawn from across the political, religious, intellectual and media spectra.

Most presentations analyzed the particularity of French antisemitism in the framework of the republic’s cherished code of “Liberty, Equality, Fraternity.” These values were set in the context of “Laicité” (inadequately translated as “secularism”) countered by the threat of so-called “communitarianism” (essentially ethnic and religious supersessionism).

A clarifying example was the French Revolution’s formal emancipation of the Jews, checked by the declaration of Stanislas de Clermont-Tonnerre, the 1789 Revolutionary Assembly member: “For the Jews as individuals, everything; as a people, nothing,” a concept confirmed under Napoleon.

“As happy as a Jew in France” became the Jewish response for nearly a century, smashed into smithereens by the 1894 “Dreyfus Affair.” France was riven by the fabricated trial for treachery of the Jewish captain, with a wave of antisemitism that resulted in Theodor Herzl’s historic Jewish State manifesto.

From Vichy Nazi collaboration to Gen. Charles De Gaulle’s 1967 characterization of the Jews as “a domineering people,” to prime minister Raymond Barre’s description of the 1980 Copernic Synagogue bombing victims as “a bomb set for the Jews killed four innocent Frenchmen,” the antisemitism continued.

“For the Jewish individual, everything! For the Jewish people or its sovereign communitarianism – the audacity of a Jewish State – nothing!”

At this CRIF convention, the moderately left former president of the NGO SOS-Racisme, Malek Boutih, was iconoclastic: “At present, there is no place where Jews can feel safe in France – because of Islamist terror, populist nationalism and the pressure of the Middle East conflict on public opinion... Antisemites adapt their discourse to circumvent the law.”

The answer lies in educating society: “Liberté, Egalité Fraternité – and a dollop of Laicité!”

OUTRAGE WAS expressed at this month’s anti-Islamophobia rally, displaying a yellow star motif – an appropriation of the Nazi-imposed yellow Star of David.

Proposed panaceas from speakers included high-school trips to Auschwitz; testimonies from victims of terrorism; and a “Laicité charter” in which “Liberté and Egalité are the pillars, Fraternité the objective!”

“The republic is demanding, but also caring, toward all its citizens” – except, of course, in the lead-up to municipal, regional and parliamentary elections, where demographics determine wooing of the vote. To this was added the critique of other democracies – the United States and United Kingdom – “where communitarianism apparently runs wild.”

On December 3, the International Holocaust Remembrance Alliance’s (IHRA) definition of antisemitism is to be debated at the French National Assembly, to which 127 of the 577 MPs have signed on. The opposition attack has already begun by some 40 pro-Palestinian NGOs, and their political party voices furious at the antisemitism = anti-Zionism equation.

French President Emmanuel Macron had given his commitment to passage of the IHRA definition at the CRIF dinner in February.

The full IHRA definition includes an appendix listing examples. To obtain a wider consensus of support, some speakers favored a vote on the basic definition, but adding the examples only as guidelines to teachers, police and judges.

The latter clearly require training in antisemitism, as they use a revolving door policy; unable to believe that victims of racism can become its perpetrators. They place the murderers of a Holocaust survivor into long-term hospital stays for tests of insanity or for being under the influence of alcohol or narcotics, in total denial of justice and the assassins’ danger to society.

From intellectual debate, the atmosphere now became more focused: “Anti-Zionism as camouflage for antisemitism”; “Boycott, Divestment, Sanctions (BDS) as redolent of the Nazi policy of ‘Kauft nicht bei Juden!’ (Don’t buy from the Jews!)”; and the issue of physical security.

Following the Charlie Hebdo massacre and the assault on the HyperCacher supermarket, president Hollande put in place a state of siege, and then-interior minister Bernard Cazeneuve announced the deployment of police, Special Forces and military personnel at all sensitive Jewish sites. Armed soldiers were placed as guards outside synagogues, schools, community centers and institutions.

At a meeting with the minister, I requested that he announce as a deterrent, on the day these contingencies are removed, the presence of 1,000 plainclothes men – even if it was not so. The military disappeared and there was no such statement.

The CRIF convention was closed by current Interior Minister Christophe Castaner. His summation:
• Antisemitism and anti-Zionism are attacks on the republic.
• All calls for boycott will be punished.
• We are planning accrued protection of sensitive sites, such as synagogues and community centers.

Implementation of this policy may well renew the dusty expression, “Happy as a Jew in France!”