**UPDATE**Following correspondence between Dr. Shimon Samuels, the Simon Wiesenthal's Centre's Director for International Relations and Professor David Zeffertt and his publisher, the Centre retracts the description of his book, "To the Ancient Land", appearing in its 14th annual report from the Frankfurt Book Fair.The several testimonials from friends of the Centre regarding the character, background and good faith of  Professor Zeffertt, were enough to substantiate his complaint.He is clearly a proud and devout Jew and ZionistAll references to his book have been removed from our website and an apology has been proffered to Prof. Zeffertt.

For the 14th year, the Simon Wiesenthal Centre is the only non-governmental organization to monitor antisemitic hate and incitement to violence on the stands of the Frankfurt Book Fair, (FBF), the world's largest with over 7,000 exhibitors from more than 100 countries. Continuing its cooperation of last year with the Wiesenthal Centre, on the 18 October eve of this 2016 Fair opening, the FBF authorities made a sweep, confiscating several clearly antisemitic titles from stands identified as violating their exhibitors’ contractual commitment against incitement to hate or violence.

- The reprinted classic “In Hidden Corners: Revealing Secrets of the Jews”, published by the Egyptian National Library and Archives (Dar Al-Kitab) in 2014. This is based on “Jews and Opportunists: Judaism in Egypt and Syria” by Georges Corneilhan of 1893, translated from the original French into Arabic by Naguib Al-Hajj in 1989. This new edition reappeared at the 2014 Kuwait and 2015 Cairo Book Fairs.

Syrian books, for the last few years, were largely displayed on the Lebanon collective stand under Beirut accommodation addresses. The present stand would seem to indicate the current empowered role of the Assad regime.

“Our own monitoring uncovered the titles below that eluded the official action,” stated Samuels: Egypt (Hall 5.1 A141) Sama for Publishing and Distribution, Cairo:

- “Marionette” by Rida Suleiman (2014) (Who was pulling the strings behind the Egyptian revolution of 2011, book cover features Star of David). The author claims that the Egyptian (and Arab) revolutions were just steps in a greater plot to destabilize those countries for the security of Israel and relocate the Palestinians in Gaza to Sinai. - “The Road to Rumiyah” by Dr. Fawzy Suwaid 2015 (Rumiyah is Classical Arabic for Rome). This novel presents religious figures interpreting religious prophecies/texts to justify their own causes at the expense of others.

- “Hijacking the Revolution...The Conspiracy Documents from January 25 until June 3” by Atef Al Ghomri, Al Ahram, 2015. This book features the US as behind the Arab Spring revolutions to create a Greater Middle East project with Israeli aggrandizement as the objective.

- On 11 October 2016, the Egyptian Ministry of Culture honoured novelist Dr. Sherif Shaban for "his effort to enrich the cultural life in Egypt through his novel ‘Daughter of Zion’, the first Egyptian novel describing the weakness of the Israeli society". The story opens with the anti-Semitic Damascus Blood Libel affair, describing the incident and then continues to the Protocols of the Elders of Zion. Samuels asked the Ministry of Culture representative if “Daughter of Zion” was exhibited on any of the Egyptian stands? He was directed to Al Ahram (see above), where he was given a CD-ROM on which it is featured. (SEE PHOTOS 6, 7 and 8 on PANEL) Last year, all 15 Iranian stands, including the Government collective, were closed in protest against the Fair's speaking invitation to death-threat victim and author of “The Satanic Verses” Salman Rushdie, proclaiming it “an insult to Islam.”

Samuels entered into conversation with a stand official, who stressed the importance of de-Zionizing Christians, When asked whether there were not Israelis and Palestinians who wanted an end to the conflict, he responded in front of witnesses: “the Zionist state must be destroyed and Iran will stop any peace agreement by Palestinians who would betray Islam,” pointing to another volume: - “Palestine”, edited by Ayotollah Khamenei, 4th edition, the Supreme Leader presents methods and tactics to annihilate Israel. Its introduction is by Ali Akbar Velayati, former Iranian Minister of Defence, indicted by INTERPOL for complicity in the 1994 AMIA Jewish Centre bombing in Buenos Aires, Argentina, leaving 85 dead and 300 wounded.

Not in violation, but deeply offensive to Jewish visitors are:

- “Why Israel? The Anatomy of Zionist Apartheid” by Suraya Dadoo and Firoz Osman

It spew a venom that precludes conflict resolution and could be understood as condoning antisemitic anti-Zionist violence.

In the current atmosphere of identity theft of Jewish heritage in UNESCO, it was disheartening to find a charming children's booklet, entitled “Battuta the Turtle  in Jerusalem”, directed to 7+ readers, that deletes Judaism's 3,500 year link with its holiest site, the “Kotel” or the Western Wall of the Temple Mount, by renaming it the “Buraq Wall” (or the “Buraq Plaza”).

In 2011, Samuels found another booklet at the Frankfurt Book Fair entitled “The Buraq Wall.” This Hamas-backed publication argued that on his night flight from Mecca to heaven the Prophet Mohammed tethered his winged steed, Buraq, to that Wall. The book proceeds to a litany of Jewish crimes, but mostly their conspiracy to steal the Buraq Wall or Plaza that can only be returned to the embrace of Islam.

The Wiesenthal Centre hoped that “the author of ‘Battuta the Turtle  in Jerusalem’, Zeynep Sevde, and the publisher, Taze Kitap of Istanbul, would revise the text to accommodate the three monotheistic religions of Jerusalem in respect to their respective narratives.” Samuels recalled, “as we warned in last year's report, German and other Jihadist teachers are known to bring their students to the Fair, seeking inflammatory materials, which can result in potentially dangerous consequences.” “The Wiesenthal's Centre's ‘Worst Offender Award 2016’ goes to Iran and ‘Runner Up’ to Egypt,” he announced. 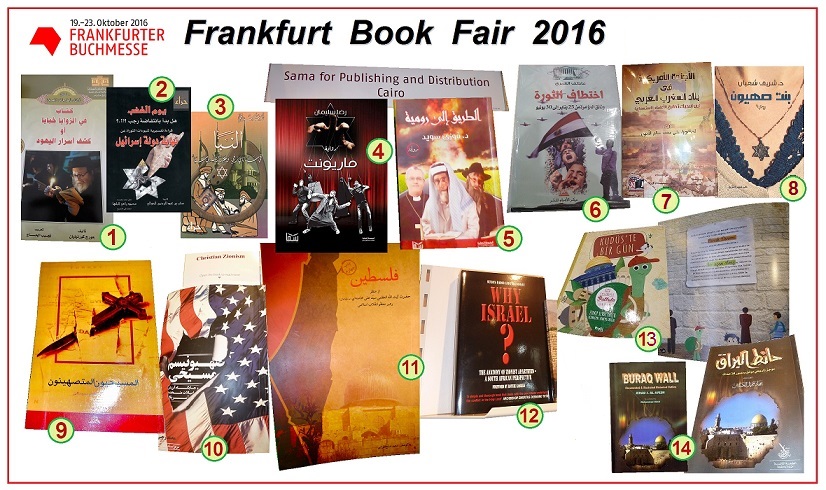