“Will the YJs resist a neo-Nazi hijack and why do the French authorities do nothing to ban them as a ‘danger to public order’?”

“At the 9th weekly march of ‘Yellow Jackets’ on 12 January,  Alain Soral, a notorious right-wing extremist and friend of the widely  acknowledged antisemite Dieudonné, had called on his website, ‘Equality & Reconciliation’, for a gathering within the context of the 19 January 10th YJ demonstration in Paris,” as monitored by the Simon Wiesenthal Centre.

The Centre had called on French Interior Minister, Christophe Castaner, to ban this neo-Nazi conclave as “a danger to public order.”

On Thursday, 17 January, Soral was sentenced, in absentia, to one year of prison for both insulting a magistrate and his antisemitic canards on the Internet, for example: “The Jews are manipulators, dominating and hateful,” noted the Centre’s Director for International Relations, Dr. Shimon Samuels.

“Apparently, this awakened some Yellow Jackets to the neo-Nazi intent to hijack their agenda, to the point of their establishing a security network within the YJ movement... Nevertheless, the meeting was held in Rungis, a Paris suburb near to Orly Airport. Some 500 attendees applauded Soral’s opening statement, ‘We are fighting National Zionism.’ He was followed by extreme-right weekly ‘Rivarol’ director, Jerome Bourbon, who inveighed  against ‘Holocaustic Dogma’,” noted Samuels.

Neo-Nazis are communicating through a video-gaming blog, where their comments generally pass unnoticed, drowned by overflow. It is there that the splits between the French extreme right are rendered apparent.
http://www.jeuxvideo.com/forums/42-51-58727383-1-0-1-0-je-sors-de-la-conference-d-alain-soral.htm

An apparent sympathizer of Dieudonné at the event, Lee-Kraa, remarked on the participants at the neo-Nazi meeting as “90% men, 99% white and total bullshit,” adding “Ali Soucrate has Arab support.” 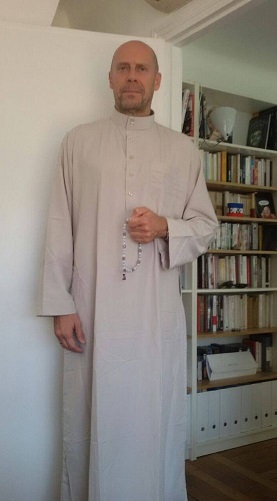 This seems to be an Islamophobic take on “Ali Sourate” - a nickname for Alain Soral, who appears to have converted to Islam (see above photo from “Rahowa73” - Racial Holy War website)... Samuels added that, “ at the same time, YJs were marching throughout France proclaiming a mantra: ‘enough of Macron and his cosmopolitan friends’ - which can be construed as a knowing or unaware stereotype for Jews...”

A disturbing statistic: “42% of the YJs had voted extreme right for Le Pen and 22% for extreme left Melenchon at the last Presidential elections.”

The Centre highlighted that “the Saturday general protest in Paris was followed on Sunday by a parade of 150 women YJs, who marched from the Eiffel Tower to the Finance Ministry in Bercy, under the banner of ‘Angry Mothers’, denouncing ‘Police violence’.”

“They are, so far, immune to the antisemitic manifestations in the American women’s movement,” pointed out the Centre.

Samuels focussed on the 36 detained in Paris by Saturday night. About half a dozen had raised their right arm in Hitler salutes... 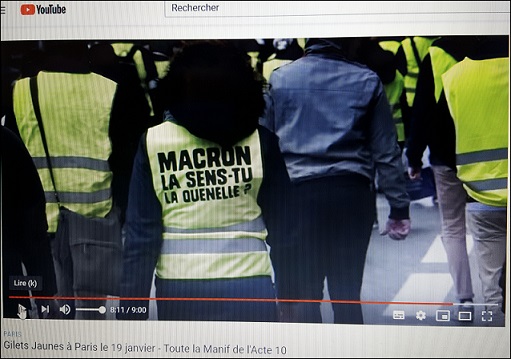 A related message printed on the back of a woman YJ’s tunic: “Macron la sens-tu la quenelle?” (Macron, can you feel the quenelle?), Dieudonné’s inverted Hitler salute. This photo was captured at 8’10 minutes, towards the end of the 9-minute YouTube video link below (credit Yves Barraud).
https://www.youtube.com/watch?v=P826TEKsH5k

“Will the YJs resist an attempted neo-Nazi hijack and why do the French authorities not ban them as “danger to public order?” concluded Samuels.