“We Hope UNESCO will take the Necessary Measures for Israel to Return.”

This year’s winners are from Moscow, St. Petersburg, Saratov and Kostroma... the fifth is an Austrian volunteer at the Russian Holocaust Centre, from Vienna.

Attended by the Permanent Delegations of Austria, France, Germany, Italy, Russia, and the President of CRIF (the umbrella body of French Jewry), the proceedings were opened by Dr. Stefania Giannini, Associate Director General for Education at UNESCO.

She characterized the Holocaust as “not like any other issue, teaching us how an ideology of hatred takes roots and contaminates society. How fragile institutions submit.”

Russian Ambassador Kuznetsov focussed on collective memory, “how 2.7 million Jews murdered were Soviet citizens, how 80% of the German war machine was pitted against and ultimately destroyed by the Red Army.”

CRIF President Francis Kalifat emphasized the Shoah “as the result of antisemitism - a social sickness”... “the struggle against antisemitism is not a menu from which to chose. Antisemitism from all sides must be countered.” He stressed the “need for recognition that hate for Israel is hate for Jews.” He congratulated President Macron’s decision for France to adopt the IHRA (International Holocaust Remembrance Alliance) Definition of Antisemitism. 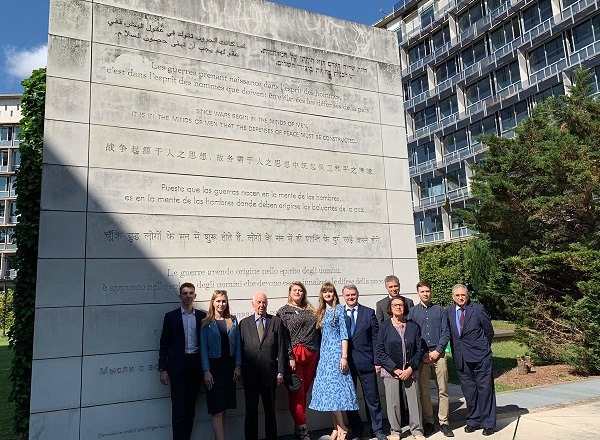 With the laureates at the Yitzhak Rabin Wall, given by Israel, bearing the UNESCO Charter preamble,“since wars begin in the minds of men, it is in the minds of men that the defences of peace must be constructed” in ten languages, including Hebrew.

Alla Gerber, Chair of the RHC, noted that “the Holocaust was not discussed in post-war Soviet Union: Stalin’s so-called ‘Jewish doctors plot’ was a form of genocide against memory... only in 1992, after Perestroika and the return to democracy, we started from scratch with memory education and prevention of antisemitism.”... “Historically, the Holocaust was mainly against the Jews, but it is a topic that concerns all humanity.”

She witnessed: “I grew up in a world of silence, as my grandparent survivors lived in a sleepy torpor - as if they were an endangered species - and never spoke about their ordeal... I sought the answers in Holocaust literature as I heard the echo of their silence. As third generation, we are walking through a forest of uprooted lives, and serve as guardians of their memory.”

François Picard, anchorman of France 24 television, recalled when he first met Shimon Samuels “during a Nazi collaborationist’s trial that unveiled personal and collective crimes, while at the same time, the ‘Never Again!’ was happening again in Rwanda.” He spoke of news stories making the past relevant: “A story has legs... the anniversary of D-Day differs from year to year. It is necessary to break down the echo chambers through exercises such as this annual Holocaust essay meeting.” He stressed that "a genocide requires dehumanization - its antidote is empathy."

Dr. Shimon Samuels, Wiesenthal Centre Director for International Relations, who chaired the meeting, recalled a gathering, international and inter-generational, of genocide survivors (native Americans, Armenians, Jews, Cambodians, Rwandans...), held in Kigali, Rwanda, a few months after the genocide. “Seated in a circle in the twilight, each presented stories - of a suitcase, of a potato, etc... There was no pecking order of suffering, just perfect empathy.”

Picard’s uncle, child survivor Robert Créange - son of a published poet engaged in intellectual resistance to Nazism - was rounded up with his entire family by the French police and held at the Vel d’Hiv stadium in Paris, listed for deportation to Auschwitz. He accentuated the sadism of the police, cutting the stadium’s water supply, and the frequent suicides among the starving detainees.

He also recounted how the family managed to flee Paris and, on their way to the south of France, his parents’ sacrifice allowed him and his sister to escape and ultimately reunite with the only other family survivor, their elderly grandfather, in 1946.

Dr. Ilya Altman, RHC founder and co-Chair, noted that essays had even been received from Mexico, South Korea and worldwide, but not yet from France. He expressed hope for major international efforts in sensitizing young generations. He then introduced the five laureates who presented summaries of their winning papers (see in attachment).

- Gabriel Paulus, student at the University of Vienna (Austria): “The Fate of Austrian Jews in the Soviet Union (during the Nazi occupation)”

- Victoria Shestakova, M.A. student at Saint-Petersburg State University (Saint-Petersburg, Russia): “Italian cinema as a vector for studying the cultural memory of the Holocaust in Italy”

- Evgenii Vlasov, student at Kostroma State University (Kostroma, Russia): “Comprehension of the Holocaust by students: an experience of sociological research in the city of Kostroma”

Austrian Ambassador Claudia Reinprecht commented on her work with the Wiesenthal Centre for UNESCO action against the Belgian Aalst antisemitic carnival float. “Austrians had lost neighbours, friends and colleagues to the Holocaust... ultimately a great loss for humanity. It is ever more important to be vigilant against antisemitism.”

Italian Ambassador Massimo Riccardo spoke of an educational approach to counter antisemitism, using all cultural instruments made available by UNESCO.

Alexeiy Kovalenko, member of the Russian delegation, noted “the monument to Jewish resistance in the camps and ghettos,” inaugurated on 4 June in Moscow by President Putin and how “the Russian Delegation will continue to be a torchbearer for this laureates programme, for the memory of the victims and against the normalization of all forms of discrimination.”

Alla Gerber added, “we must focus not just on those who died, but against indifference to heroism in the face of evil, to neutralize the roots of hatred.”

Verbe et Lumière - Vigilance President, Richard Odier, concluded the meeting quoting Martin Luther King Jr.: “hate needs to be fought in two ways, through Justice and with Empathy.” He added his satisfaction to hear Hebrew spoken in an institution from which Israel has departed. “I hope that UNESCO will take the necessary measures for Israel to return.”