Italy: the Hatemongering Wine-Waiter of Europe?

“The export of wine bottles commemorating Nazism must be monitored and penalized.”

In a letter to European Commission Coordinator on Combating Antisemitism, Katharina Von Schnurbein, the Simon Wiesenthal Centre Director for International Relations, Dr. Shimon Samuels, and the President of the European Coalition of Cities Against Racism, Dr. Benedetto Zacchiroli, brought attention to the abuse of Italy and its wine industry into playing the role of “the hatemongering wine-waiter of Europe.”

The Wiesenthal Centre and ECCAR are working together on combating Antisemitism and other forms of discrimination in Europe.

In 1995, Samuels first protested, on behalf of the SWC-Europe, the production in Italy of so-called "Fuhrerwein". For a short period, these bottles vanished from the shelves.

The joint letter stated that, "The principal winery of the Lunardelli family in Veneto annually produces 100,000 bottles marketed as 'the Historic Line,' most of which feature photos of Hitler, Mussolini and other dictators... In 2007, 20,000 Lunardelli bottles were confiscated by the police, but released for sale after a Bolzano court ruling."

Samuels recalled that, "In 2013, the Wiesenthal Centre had protested again the sale of these hateful bottles."
https://www.telegraph.co.uk/news/worldnews/europe/italy/10236043/Wiesenthal-Centre-calls-for-boycott-of-Hitler-wine.html

ECCAR and the Centre noted that, "In 2017, a draft law, entitled the 'Legge Fiano' was presented to the Italian Parliament 'to criminalize the propagation of images or contents of the Fascist, Nazi or related anti-democratic parties and ideologies,' designated to be introduced in the penal code as article 293-bis, incurring a punishment of six to 24 months imprisonment...  The law was passed in the Lower Chamber (Camera dei Deputati), but abandoned by the Senate, following dissolution of the legislature (the Italian system requires the forfeiture of all bills that did not reach the final vote in both houses)."

Thus Italy remains the major centre for the sale of Hitler cakes (exposed by the Wiesenthal Centre), wine and beer bottles, keyrings, calendars and other Nazi-Fascist memorabilia. 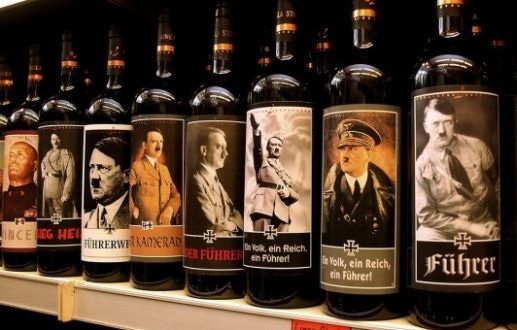 The Centre added, "This summer, our members reported and photographed 'Sieg Heil' and 'Ein Volk, ein Reich, ein Fuhrer' bottle labels in supermarkets from Lido di Jesolo (Venice) to Foggia (Puglia) in the south. At €5,90 each, it can be assumed that purchasers were more interested in the bottles rather than the quality of the wine."

The letter continued: "We urge Italy to take seriously the abuse of its image and wine industry, casting its current status as 'the hatemongering wine-waiter of Europe'."

According to Samuels and Zacchiroli, "The model across the continent is the German Strafgesetzbuch 8ba, which prohibits the use of symbols associated with the Nazi party."... "As an example, a German pub owner was given a three year prison sentence for placing four bottles with Adolf Hitler labels on his bar."

The letter called on Ms. Schnurbein "to bring this matter to the appropriate EU bodies and ensure that prompt action be taken by Italy."

"There may be no legal sanctions yet for domestic sales of hate. Its export, however, to Germany and France - with their existing legislation - and across the EU, must be monitored and penalized," concluded Samuels.