“The invitation to bring our exhibition ‘People, Book, Land: the 3,500 Year Relationship of the Jewish People with the Holy Land’ to the ‘Olympics of Book Fairs’ came out of the blue,” noted the Simon Wiesenthal Centre’s Director for International Relations, Dr. Shimon Samuels.

“We have for 16 years been the only non-governmental organisation to annually monitor incitement to hate and violence on the shelves – books in violation of their contractual obligation to the Fair,” he added, “now we were granted the opportunity to apply an antidote.”

Jürgen Boos, the Director of the massive Fair, hosting 7,400 exhibitors from 104 countries and receiving over 300,000 visitors, has shown great interest in the Centre’s work.

Moreover, Samuels had requested Frankfurt Mayor Uwe Becker – a champion against antisemitism and ‘BDS’ – at the ‘Muni-World’ conference of Mayors last March in Tel-Aviv, to open the exhibition at an appropriate venue in Frankfurt. The 2019 Book Fair was that venue.

Mayor Becker welcomed the guests, who included the DCM of the Canadian Embassy (Canada will be the 2020 FBF Honoured Guest), the United States Consuls-General for Frankfurt and Leipzig, Frankfurt religious leaders and the Fair’s Vice President.

The Mayor stressed that “the exhibition ‘People, Book, Land’ proves that the relationship between the Jewish people and the State of Israel did not begin in 1948 due to the Shoah. That industrialized mass murder was more than the murder of six million, but rather six million times the murder of single persons – each stripped of their rights, dehumanized and killed.”

“This exhibition happens at the right time, as we see a new rise of antisemitism. It is also in the right place, Frankfurt with 170 nationalities, 200 languages, all religions.”

“The exhibition is an instrument to counter far-right extremists and the anti-Zionist left that singles out Israel among all countries and thereby delegitimizes its own existence, proving to be an antisemitic left. The exhibition shows not only suffering but also the bright colour and richness of Jewish culture.”

“We not only welcome 3,500 years of Jewish history, but next year we celebrate 1,700 years of Jewish presence in Germany – an occasion to show what the Jews have done for the development of our country, not just the dark moments, but also the friendship between the State of Israel and Germany.”

Samuels presented the Mayor with a 2,000 year old Judean oil clay lamp “to illuminate your path in the challenges ahead.” 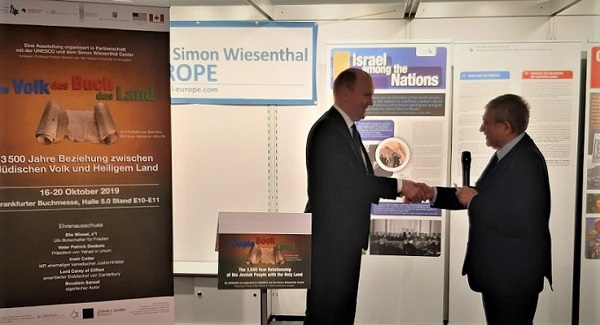 Rabbi Julian-Chaim Soussan, representing the Frankfurt Jewish Community, quoted a historian who claimed that the Jews had much history but little geography. “But the Promised Land and Jerusalem travelled within our hearts, wherever we resided. Conquerors of the land of Israel made it a province of their empires... For the Jews, however, their land was to be a bridgehead for morality and solidarity, accepting neighbours and strangers as we have been strangers in a foreign land. This exhibition shows that the Jews on their land wish to live in peace and respect.”

Senator Michael Keller referred to the fact that the attempted attack on the Halle synagogue on Yom Kippur is a shadow for the timely presentation of this exhibition… “There are signs that the German people are losing sensitivity to the Jews… Perhaps this exhibition can spark a new curiosity and understanding of their Jewish neighbours.”

- Jonannes zu Elz, Deacon for the Frankfurt Catholic Church declared that “Jews and Christians have in common their Holy Scriptures and love for the Holy Land, Eretz Israel... It is a Christian religious interest that the 3,500 year history of the Jews in the Holy Land continue and the Lord bless them with peace.”

- Ursula Schoen, Vice-Dean of the Frankfurt Evangelist Church, congratulated the Wiesenthal Centre initiative, adding a little known and shocking factor: “This Fair, this location has a dark history. This was the deportation rallying point for the Jews to be sent on to the concentration camps and their death... This exhibition is a sign of hope for Israel’s future, both Land and State. We wish to accompany you on that path.”

- Tobias Voss, Vice-President of the Fair, closed the launch by emphasizing that “last week’s Yom Kippur vicious attack in Halle made it impossible to return to business as usual... It is difficult to imagine the fear of the people locked up in the synagogue. It fills us with profound sadness, anger and above all shame that an attack on Jews can happen in 2019 Germany.

“As the representative of Frankfurt to the Jerusalem Book Fair for many years, I have many friends in that city. The exhibition sheds light on the history of the Jewish people, Jerusalem and the Holy Land and carries many facts still unknown to me. We wish to share our curiosity and hope that this presence will be a resounding success.”

Samuels thanked Vice-President Voss and before the opening expressed the Centre’s gratitude to Director Jürgen Boos.

Shimon Samuels with Jürgen Boos, Director of the Frankfurter Buchmesse
/Catalogue entry for the Wiesenthal Centre’s exhibition at the Book Fair.

“In the shadow of the Halle terrorist attack, the Fair was taking no chances, sending security to guarantee our exhibition's safety... the Fair organizers defined their invitation to our exhibition as a tool for education against antisemitism, racism and bigotry.

“Apart from a few visitors from the Iranian stand a few paces away, who seemed quite amazed at reading the panels, other visitors were very positive in offering to assist in future presentations,” concluded Samuels.