The Centre, in Consultative Status to the 35-member Organization of American States (OAS), proposed the pressing need for a designated unit on Iranian activity across the Americas.

“The couple’s arrival via Spain, where Iran is politically active, a week before the 27th anniversary of the Israeli Embassy bombing leaving 22 dead and over 200 wounded, is an alert.”

On 12 March, Argentine airport security detained an Iranian couple who tried to enter the country from Spain, with stolen and falsified Israeli passports.

“Only a week before the 27th anniversary of the attack on the Israeli Embassy in Argentina that left 22 dead and more than 200 wounded, this casts particular concern in view of the timing of their arrival and reveals that continued Iranian mayhem in Latin America is highly dangerous,” stated Dr. Shimon Samuels and Ariel Gelblung, respectively the Centre’s Director for International Relations and Representative for Latin America.

UNESCO has been urged to remove Aalst from its List of Intangible Cultural Heritage of Humanity by UK Lawyers for Israel (UKLFI) and the Simon Wiesenthal Centre (SWC), following repeated antisemitic displays.

UKLFI is a voluntary association of lawyers combatting anti-Israel and antisemitic activity. The SWC is a global human rights organization researching the Holocaust and hate in a historic and contemporary context and is accredited by UNESCO as an Associate Partner NGO.

The Bureau of the Intergovernmental Committee for the Safeguarding of Intangible Cultural Heritage is meeting on 21 March 2019. UKLFI and SWC have written to its six members, formally requesting them to make the appropriate preparations so that the Committee can take a decision to remove the Aalst Carnival at its plenary meeting in December.

“Wiesenthal Centre turns to Italian National Partisans Association (ANPI) to investigate baker and parents, who offend the anti-Nazi Bologna resistance and the victims of the Holocaust.” 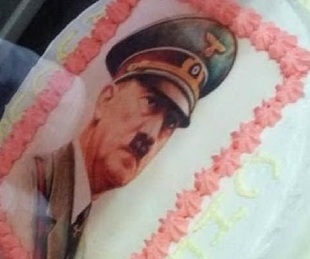 Samuels continued, “apparently, the host parents and the baker claimed their act was meant to be a 'prank' without any intention to offend”...

Three schoolmates were reported as having refused to taste the cakes and reported the scene to their teacher.

The Centre emphasized that, “even more sickening, was the date of this travesty: 27 January - International Holocaust Commemoration Day.”

“We turn to ANPI to investigate and seek appropriate measures against the parents and the pastry cook, who indeed offended the anti-Nazi resistance and the victims of the Holocaust,”... Moreover, "ANPI is well placed to engage in an educational initiative for schools, to sensitize parents through their children to the dangers of Holocaust abuse"... "the Simon Wiesenthal Centre - Europe stands ready to assist in this campaign," concluded Samuels.

The letter noted “the hateful stereotyping of Jews sitting on moneybags with pronounced antisemitic hook-nosed features as reminescent of Nazi-collaborator Belgium,” adding, “Smoking a cigar, with his hand outstretched as a beggar, we are apparently viewing the 'manipulators' of “rising prices.” ..."So claim the float creators, Vismooil’n, inexplicably naming their portrayal: “Shabbat Year.”

Samuels recalled that, “this is not the first such travesty in the Aalst Carnival. Six years ago, a railway car float featured Flemish politicians carrying Zyklon B gas canisters used to mass murder Jews and other victims of the Nazis. Measures, then untaken, encouraged Aalst to permit recidivist hatemongering.”

The Centre continued: “Our members expect nothing less than your government’s public condemnation and your Ministry to take measures to penalize the authors of this outrage.”... emphasizing  how "one might argue that it may be time for a centuries-old Jewish community not far from Aalst - the seat of the diamond industry in Antwerp - to consider a move with, probable consequences far greater than “rising prices” and a so-called “Shabbat Year.”

“Mr. Minister, the Aalst Carnaval float brings not only indignation to world Jewry and their Gentile friends. It portends a threat and alert for both your government portfolios: Interior and Security. Above all, it sullies the good name of Belgium as host of the European Institutions”, concluded Samuels.

Simon Wiesenthal Centre Director for International Relations, Dr. Shimon Samuels, and European Project Manager, Alex Uberti, attended the 2019 Muni-Expo gathering in Tel Aviv. Some 200 Israeli and 150 plus international Mayors were treated to a cutting-edge display of equipment for municipal services and anti-terrorism security.

This year, meetings were held with Israeli cities twinned with counterparts in Europe, such as Ramat Gan and Strasbourg (also seat of the Council of Europe and of the European Parliament), Netanya and Dortmund or Kiryat Shmona and Nancy. 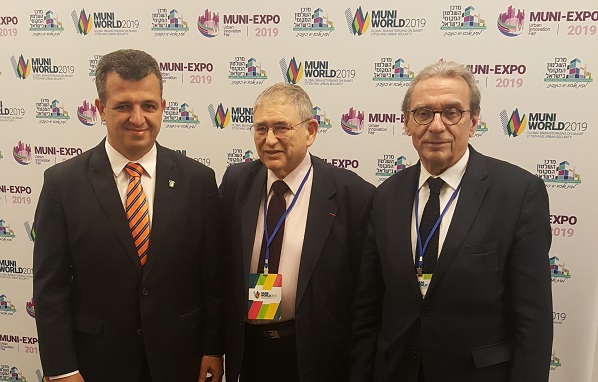